The Herts Hawks picked up a confidence-boosting 19-9 away win over the South London Pirates. A spirited comeback in the final inning of the second game brought 2 runs in to make the score 8-7 for the Pirates, but the Pirates held on for the win leaving the bases loaded.

Andrew Slater pitched a complete game for the Hawks to pick up the win. He allowed 7 runs in the first two innings but over the 5 innings that followed only 2 Pirates came home to score. From those 9 runs only 3 were earned as the Hawks were still getting up to speed defensively. It must be added that both teams struggled defensively as they had to work on an unpredictable playing surface with a very long grass.

We always hear TV pundits say that no matter how many games of baseball one has seen, baseball finds a way of surprising us with something unusual. Today it was a play at first base. The South London Pirates batter reached first base safely. He started rolling up his pants and in the process stepped off the bag without time out being called by the umpire at which point Hawks first baseman, Rod Naghar, applied the tag and claimed the out. All eyes turned towards the umpire to receive a confirmation of the call, but it appeared that he didn’t see it and his body language suggested that he was in two minds about whether the runner is out or safe. Without a confirmation from the umpire the runner seemed to assume that he was out and he walked away from the base gesticulating as if to explain that he stepped off the bag because he wanted to check the extent of the knock on his leg. He was suggesting angrily that it is unfair for someone to apply a tag under such circumstances. While he was complaining around the infield, the tag was applied to the relief of the umpire who was now able to confirm that the runner is out without any of the earlier hesitation. The runner seemed upset that no one was seeing his side of the argument, and shouted out loud “I love you all and Good bye” while turning towards the home and the away spectator areas after which he packed his bag and left for the car park. 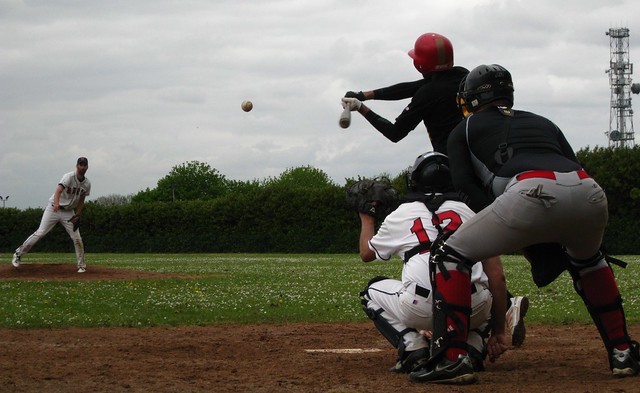 Charlie Mayhew started the second game for the Hawks and he was outstanding. He allowed only 7 runs in 5 innings of work. Many of them were unearned. He had reached the 95-pitch limit which applies to 16-year-old players and Greg Bochan came in to pitch the last two innings of the game. At that point the Pirates had a 7-5 lead. Bochan allowed only 1 run in those final two innings which ended with him turning a 1-6 double play. A little earlier in the game there was a display of real determination by Hawks catcher, Ken Pike. Charlie Mayhew was at the plate and as the Pirates pitcher was about to deliver his pitch, he could hear a strange oncoming noise from third base. It seemed like Ken Pike had given himself the green light to steal home and Mayhew was not aware that this play was on. To void the risk of Mayhew swinging the bat and hitting him, Ken Pike, gave several loud and clear instructions to Mayhew “Get out of the way, get out of the way”. He had taken a very daring early jump on the pitcher and arrived at home plate even before the pitch had hit the catcher’s glove.

It came down to the seventh and final inning. The Hawks were trailing 8-5. They needed something special against a good Pirates pitcher who had shut out Herts in 5 of the previous 6 innings. John Kjorstad stepped up and drove the ball high and deep but the Pirates centerfielder somehow got to the ball for the first out. Greg Bochan was next up. He was having another amazing day defensively and offensively and he started the Herts rally with a powerful line drive to right centerfield for a single. Aspi Dimitrov also singled. Ken Pike had to battle not only with the pitcher but also against a fluctuating strike zone and went down swinging for the second out of the inning. Dan Bartram also felt frustrated by the strike zone but delivered a single which drove in Bochan to reduce the deficit to 2 runs. The next two batters were Charlie Mayhew and Kal Dimitrov. Both were hit by pitch to load the bases and bring in the second run of the inning. The score was now 8-7 with the bases still loaded. The spotlight was on the next batter, Arnie Longboy, who had an impressive game. He managed to drive the ball hard and only a diving play by the South London second baseman prevented the ball from going through the infield for what would certainly have brought the tying and go-ahead runs in. There was serious doubt whether the second baseman managed to catch the ball before it had dropped on the ground. The umpire judged that it was a clean catch and that was the game-ending play. After the game the Pirates second baseman admitted that it was in fact a trapped ball and not a catch, but it would have been very harsh to put any blame on the umpire who was working alone without the help of a base umpire.

The two teams will meet again this Sunday at Grovehill Ballpark. The Hawks have the opportunity to get straight back into the playoff race if they can sweep the Pirates. Can they do it? The first game of the doubleheader starts at 1pm on the new diamond.