The Raptors arrived in Brentwood determined to get their first win of the season. The sun was shining brightly and it was a great day for baseball.

With the Raptors ready to go, the start time came and passed, with both teams awaiting the arrival of the match umpire. However the game still did not start until after both teams had lined up to be introduced to the mayor of Brentwood. With the ceremony finally concluded the game began.

Lead off batter Mike Cresswell stepped to the plate and took strike one above shoulder height and the tone for the day had been set.

In a hard fought game the Bucks leapt out to a 12-1 lead after two innings with Herts starting pitcher Jamie Lang tiring after throwing 87 pitches in search of an elusive and ever changing K-zone. Raptors scored 3 in the top of the third before Cresswell came in to relieve Lang for the bottom of the third. He slowed the Bucks charge holding them to 1 run in the bottom of the inning to make the score 13-4. Raptors then showed their teeth in the top of the fourth scoring seven runs without an out before Bucks pitcher Cook retired the next three in a row including striking out Raptors first baseman Will Belbin (who had originally got the inning going with a single) swinging at a high pitch that today he could not afford to take. Brentwood then added 4 more in the bottom of the inning to make the score 17-11 before lefty Cresswell’s superb pick off to 1st caught Bucks’ Davenport off of 1st and with no option but to head for second and into a run down situation that the Herts infield gladly took. 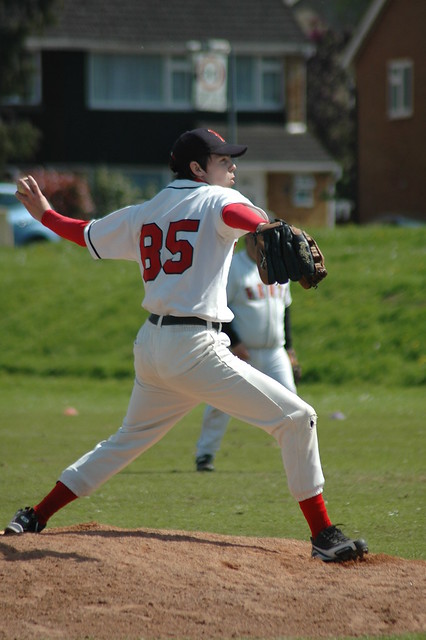 With the run rate slowing and the score 19-15, Jeff Witter came in to pitch the 6th inning for Herts, relieving Cresswell. Rob Jones also came into the game at shortstop with Raptors manager Geoff Thomas shuffling round his infield. Witter held the Bucks to one run in the sixth and with Herts failing to score in the 7th, everybody stretched as the slow moving game had already been going for four hours.

Bucks tacked on two more in the bottom of the seventh after a contentious call at home plate saw Bucks run threat Harris sliding into the tag applied by Herts catcher Smithers before being called safe, much to the incredulity of the whole Herts infield who were already trotting off the diamond. Manager Thomas came out to dispute the decision and intervene before his catcher, who had finally had enough and was voicing his opinion of the umpires decision, was tossed from the game. Despite his protestations and the clear evidence in the sand of a slide that had not reached the plate, the call stood.

Raptors were incensed and Thomas coralled his team between innings and implored them to go out & score the runs needed to win this game. Despite scoring four runs in the 8th aided by a pinch hitting Thomas’s double (in his first at bat of the season) the Raptors didn’t help their own cause with Smithers caught daydreaming off the bag at second for the second out of the eighth. Brentwood added 3 more in the bottom of the 8th inning to extend their lead to 25-19. Despite Herts best efforts, including Thomas hustling to second on a ball four wild pitch, they were only able to add another five runs. Finally losing 25-24, with Lang taking the loss, they had fought determinedly. Co-manager Rob Jones offered an extremely diplomatic view upon the game. “Brentwood is always a tough place to go and play. There were times today when we felt things weren’t going our way, a few calls went against us but players showed great spirit to keep rallying back.”

Notable Raptors batting stats for the day were….

Now 0-2, Raptors will look to regroup and look longingly ahead to their first game of the season at Grovehill Ballpark on Sunday, May 18.