Herts Falcons’ playoff hopes have received a boost with the acquisition of Ryan Hackel. He is a middle infielder and Herts fans will hope that he will be able to fill the void left after the departure of Robbie Unsell and Xavier Gonzalez who now play in the USA and Germany, respectively.

The 22-year-old started his baseball career at a very young age with Hard 90 Baseball Academy. In 2007 he moved on to Varsity Baseball, playing for three schools in four years – Vacaville Christian High School (2007), Vanden High School (2008) and Hastings High School (2009-2010).

In 2011 and 2012 Hackel moved on to College Baseball becoming the starting shortstop for Hamline University in his freshman year. 2011 was a memorable year in many ways as Hamline University went on to win the MIAC Championship for the first time in their history. An interesting fact about Hamline University is that they play most of their home games at the 48,000-capacity Metrodome (pictured above), which is the former home of the Minnesota Twins. They have even had occasions when their games at that indoor arena have continued beyond midnight, as late as 2:30am in the morning. 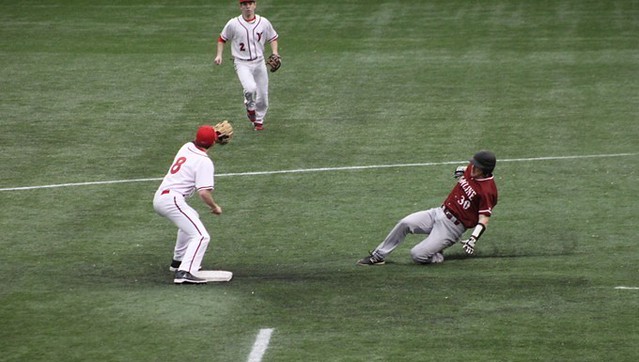 Hackel is expected to join the team shortly and this is very timely as the Falcons are looking to regain momentum after the squad was depleted by a series of injuries to Abel Salas, Cris Hiche, Mike Osborn, Ryan Bird and Tom Armstrong. Most of them are now gradually returning to full fitness and it will be interesting to see if the team can turn its season around. The race appears to be a lot closer this season so the Falcons are very much in touch with the playoff contenders. They travel to Southampton this Sunday, 1 June, for a doubleheader with the Mustangs and an opportunity to get straight back into the race.