There was frost on the grass when I got up for the Raptors season opener on Sunday. Not usually a good sign, writes Rob Jones. But the sun was shining by the end of the day — in more ways than one.

Scheduling had meant this day was a long time coming. The first of May before we had a league game. I was not at all happy about that when I found out — but since I would sooner eat my own socks than attempt to please all the people by drawing up a schedule, I can’t really complain!

The interminable off-season and the elongated pre-season had seen very little baseball activity for me. Sometimes my work pattern can be kind to me, sometimes not. This year it was not. I had been to a couple of sessions at Grovehill which amounted to little more than freezing cold pick-up games. Barely even training sessions. I say that not to denigrate the efforts of the organisers, because these were over and above the formal training sessions. It’s just that these were the only ones I made it to.

Overall I had actually been happy with the way I fielded the ball during these sessions. After more than a decade playing baseball, maybe it was finally becoming second nature to pick up the ball cleanly. Now at last I might be on a par with some 10-year old American kids.

Just some of them, mind you. Most will be waaaay better than me.

Anyway, I felt that side of things was going well. Throwing the ball was more of a challenge. Maybe too much over-thinking, too much caution fearing that I hadn’t warmed up thoroughly. I’ve been trying hard to run a couple of times a week and keep fit, but have had very few visits to the park where I throw the ball against a wall.

I had at least been watching some MLB spring training. It’s a wonderful thing in the depth of a British winter to see the lush green ballparks in Florida and Arizona.

And oddly, one of the most satisfying things is watching stars of today and the future boot the ball around like they are amateurs! In the random selection of games I saw I found muffed double plays, misplayed grounders and even dropped fly balls.

It’s not schadenfreude. As such. Not quite. But while we are all nagged by our inadequacies, it is good to see that the world’s top professionals don’t always get it right.

It was clear that there was also some rust in the Herts Raptors as the opening game got underway at Finsbury Park. There were some half-hearted swings, some late decisions with the bat which suggested we had not faced much live pitching. 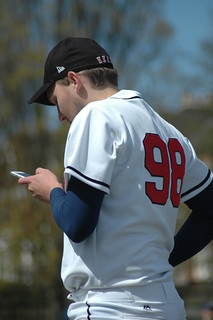 There were let-downs on the base-paths too. When I blooped a single over first base, the runner on third did not take off as you would expect. And with us then having first and third, I promptly missed the obvious chance to steal and help the inning develop.

I stole on the next pitch, which was fouled back; then the next one, which was popped up and neary turned into a double play. Then I had no more legs for stealing! In a tight game like this one, we could have done with the extra couple of runs that could’ve been gained by ironing out these mistakes.

Our esteemed president, Aspi, had some adventures on the base-paths too, but that was probably my fault. He got on, and looked over for a signal. I gave a series, but had not intended to send him due to his still recuperating knee.

When he then surprisingly set off, he was nearly doubled off because of a pop-up! He scrambled back successfully, and I then changed our signals to the mould-breaking shout of “Don’t steal! No steal!” Not sure if the opposition cracked that code….

As you can find out elsewhere on this website, the game actually ended as a great success. Those were the sunny uplands we Raptors reached by Sunday lunchtime. A tight, MLB-style game ended 7-3 thanks to great pitching from Matt and good defense behind him, especially from Mikey at first base.

I did my little bit from shortsop, getting a runner out on a routine grounder, and driving in two runs with a 2-4 performance at the plate.

But the rust prompted me to strike out on high pitches, and to misjudge an infield dying quail. So I shall get out my polish, and head on into next week’s game looking to take another step forward.