The Most Valuable Players (MVP) of the ten Herts adult and youth teams have been announced.  This year the club opened the voting up to include not only Herts club members but the wider public, similar to MLB’s All Star voting. The Herts Falcons made history this year playing in the European Federations Cup for the first time and despite a disappointing season in the National Baseball League, there wasn’t a shortage of candidates. In a very close race fans decided that this year’s Falcons MVP is Jarrod Pretorius (17% of the votes) who was among the team leaders in a number of categories including home runs and slugging average. There was less doubt about the Herts Londoners’ MVP. Pitcher Chris Gregory won it convincingly with 29% of the votes after a phenomenal debut season at the club during which he had the most wins, best ERA and was also at or near the top of many offence and defence categories. He was also the starting pitcher who recorded the only Falcons’ win in the five European Federations Cup games. Mike Cresswell was the driving force for the Herts Hawks this season as the team’s player-manager and he was voted MVP (31% of the votes). He has made huge strides since joining Herts in 2012 starting at Single-A and moving rapidly up the leagues. This year he even earned a call-up to play for the Herts Falcons in the European Federations Cup. Similar to the Hawks, fans decided that the Raptors MVP is its player-manager, Matt Jackson, with 22% of the votes. He led the team in most of the batting categories. With so many young players making their debuts for the Raptors this season and performing better with each passing week, it is expected that Jackson will have a lot more competition in the MVP voting in the years to come. There were many credible candidates for Herts Eagles MVP but Rob Gibson was the one who stood out in every aspect of the game and this was reflected in the MVP poll which he won convincingly with 28% of the votes. It is rare to see a 5-tool player in the Single-A League and Gibson is not far from being certified as one. The MVP poll for the Herts youth teams attracted the largest number of votes and it looks like friends, family members and school mates took part in vast numbers which the club was very pleased to see. Involving the wider community was one of the reasons for opening the voting up to the public. 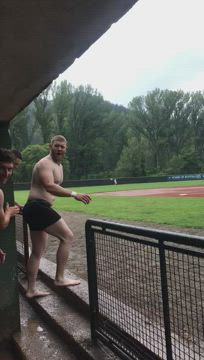 There was a tight race in the vote for Play of the Year. Eight of the nine nominees were Eagles or Raptors, but it was the Herts Falcons’ semi-nude antics in Bulgaria that won it.  Originally, this was nominated for the Nob-Out Award and it was added to the Play of the Year category in the last minute, but the fans have spoken and it looks like they felt that, despite lacking in baseball skill, it had an abundance of flair. Over 30,000 viewed the video on social networks which reaffirmed its credentials.

It was an even bigger surprise that it didn’t win the Nob-Out Award.  That accolade went to Herts Raptors’ Mantas Poderys who nominated himself for falling face-first a few feet short of first base in the Herts Derby away at the Eagles. Herts Hawks’ Gilberto Medina just missed out in second place. He was nominated for reporting for duty at the ballpark on the wrong day of the week.

The 2019 season may have ended but the start of Spring Training is not far away and the Herts adult and youth league teams in Hemel Hempstead and North West London will be starting their preparations for the 2020 season. New players interested to find out more about playing baseball and joining Herts in 2020 can contact the club.