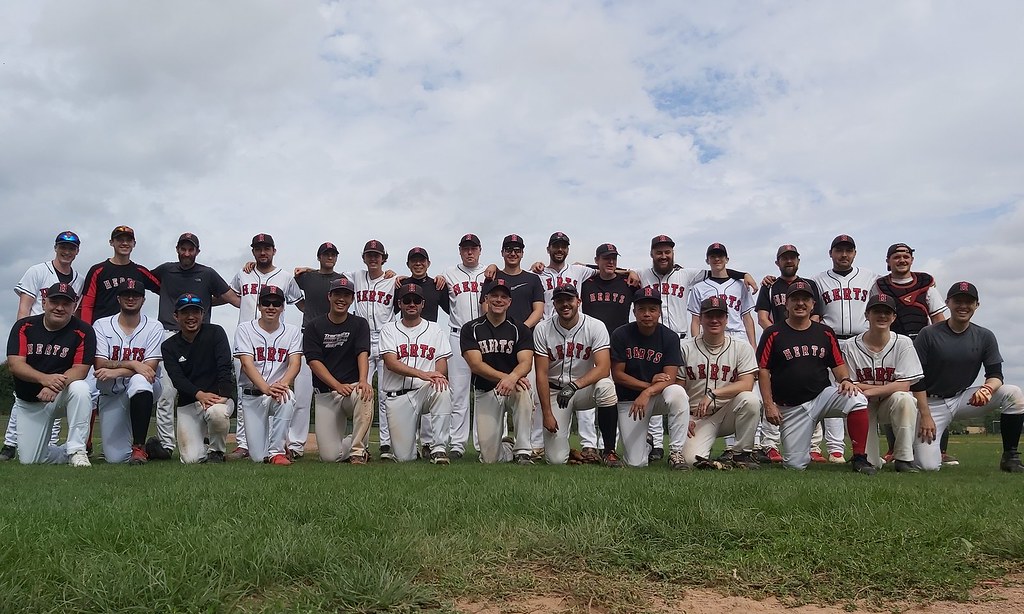 That might be the phrase ringing in the ears of the Herts Hawks after they dug themselves out of an early hole to win their playoff match-up against friends and club-mates, the Herts Londoners.

The two teams faced off at Grovehill on Sunday (September 4th) in the first round of the Single-A playoffs. This seven-inning game was the first playoff derby for Herts since 2016, and the first time since 2019 the club had a side reach the BBF post-season.

The visiting Londoners struck first, and struck hard. Leadoff man Hunter Devine doubled and stole third, then scored on a sacrifice fly by Sonam Lama. A double by Greg Bochan and a triple from Norman Peng helped bring in the maximum 5 runs.

In reply, the Hawks also got their leadoff man aboard, Harry McMenamin. He ultimately came home on a throwing error, but would be the only run of the inning. It was 5-1 Londoners.

The visitors threatened again in the second, but scored only one. They suffered a setback when Devine was thrown out stealing second base thanks to a move by pitcher Ken Pike which the Londoners thought was illegal. There was a long debate – with both dugouts consulting the rule-book – but the umpire did not see a balk, and no amount of debate changed that fact.

The powerful Hawks offense then got into gear in the bottom of the second. Paul le Guillou hit a double and Pete Hogg a triple, and the home side brought in 4 runs.

The Londoners loaded the bases in the third but couldn’t get a run across the plate. The Hawks saw their chance, and jumped into a 7-6 lead. Antony Lavender and Jack O’Brien were among those doing the damage, and chasing starter Andrew Slater from the game.

Hawks extended their lead to 9-6 in the fourth but the Londoners were not rolling over. A single from Bochan – who ended the day 4 for 4 – got them started, and they loaded the bases again. This time, they would capitalise. Devine was hit by a pitch to bring home one, while Zak Beller’s hit scored Arnie Longboy and Nic Goetz. Momentum had switched.

Now it was the Londoners who were 11-9 up, and in the driving seat. Goetz was pitching in relief and, for the first time, the visitors kept the Hawks off the board in the bottom of the fifth. This game was always going to be close, now it was tense, too.

The home side turned to their bullpen, and Giuseppe Basilea did the business. The former Herts youth player, only recently returned to the club, struck out two and induced a flyout to record a scoreless inning.

The final and decisive rally was started by Todd Neville, hit by a pitch to lead off. Then Pedro Martins singled. McMenamin got another hit — and by the time he had stolen his way round to third base, he represented the winning run. Nobody was out.

As the Hawks dugout shouted for calm, they knew they were touching victory. Cam Schultz grounded out, but there was no way to stop McMenamin racing home on the play to be mobbed by his team. A 13-12 walkoff win.

The Hawks will travel to Bristol for their playoff semi-final, where they will face the Formosa Islanders on Saturday (10th September).