Herts Falcons’ John Blose beats the ball sliding into third base. (photo by Will Baxter)

At the weekend the MLB season got underway with the opening series between the LA Dodgers and Arizona D’Backs at the Sydney Cricket Ground in Australia and so did the Herts Spring League at Grovehill Ballpark in Hemel Hempstead and Town Mead Ballpark in Waltham Abbey.

With the exception of the biting wind and a ten-minute game delay due to hale, this was the ideal way for British teams to make their pre-season preparations. The weekend had everything from home runs and spectacular fielding plays to walk-off wins and shutouts.

The 4 London teams overpowered their opponents winning all five of their games. On Saturday in the HSL Single-A division, the Marauders and Musketeers won against the Kent Mariners and Herts Raptors respectively. This was the first game for the Musketeers as they prepare for their debut season in the BBF Single-A league. They seemed like a fun group of players with some outstanding heavy-metal hairstyles and facial hair.

On Sunday, the London Mammoths and London Metros continued the winning streak with wins over Southampton Mustangs (AA), Herts Hawks and the Herts Falcons. John Peters continued his incredible streak of remaining unbeaten so far in his pitching career. The streak goes back to last season when he appeared on the British baseball scene like Jimmy Morris of the Tampa Bay Rays as depicted in the movie “The Rookie” starring Dennis Quaid. Last season he was a member of the London Marauders but his performances have pushed him up into the Double-A roster of the London Mammoths. He allowed a home run by GB Team player, Gary Davison, but that didn’t prevent him from picking up the win with a final score 11-7. 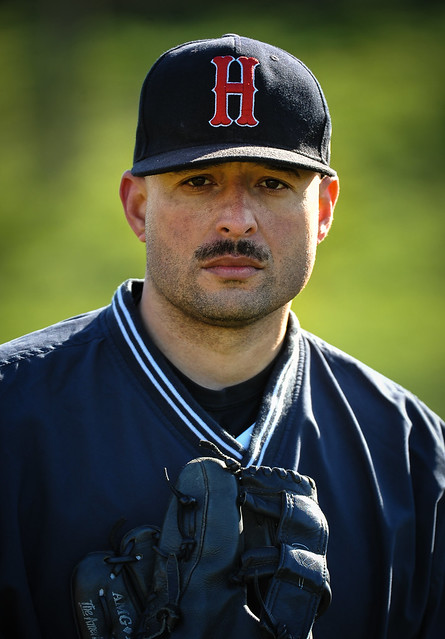 The London Metros versus Herts Falcons game was much anticipated as it was an opportunity to see a few of the new arrivals for the two teams. Both teams fielded a mix of NBL and AAA players. The Falcons gave debut to Abelardo Salas (pictured right). The leftie had a good outing on the mound working well with catcher Ryan Bird. Errors in the field proved to be very costly for the Falcons as the Metros went on to win the game convincingly. Herts fans were also able to see Robert Davis for the first time. He impressed driving the ball deep into left field in his first at bat. The ball fell just a few inched short of the home run fence and that was with the wind blowing in the opposite direction. The highlight of the game was 2014 NBL MVP, Ryan Bird, at bat against Pietro Sollecito who had the lowest ERA in the NBL last season. It was a 10-pitch battle which started with Bird driving the ball deep over the right field wall only for the wind to take it to the wrong side of the foul pole. Sollecito came back strong forcing Bird to foul-off a large number of pitches. The at bat ended with a not so dramatic walk but everyone knew that this was a battle of titans. It will be interesting to see them clash again on Sunday, 6 April, as the Mets and Falcons open the 2014 NBL season at Grovehill Ballpark.

Over in Waltham Abbey, Essex Arrows won convincingly in the Essex derby with the Essex Redbacks. The Arrows are expected to be in the thick of the NBL title race this year. Milton Keynes Coyotes picked up a good win against last year’s Single-A national runners-up Haverhill Blackjacks.

The action continues next weekend with the addition of 6 more teams making an appearance.

WEAR THE HERTS BASEBALL JERSEY IN 2014