We are starting to see team rosters shaping up in the HSL games as the 2014 baseball season is just days away. The Herts Falcons are being reinforced by new signings Abelardo Salas, Andrew Fulford and Jamie Gregory. Another new arrival, Robert Davis, had an emergency and missed the final pre-season games of the Falcons, so we will have to wait and see if he has done enough to be included in the Herts roster on NBL Opening Day this Sunday, or whether he will start in the minor leagues and look to work his way up in the coming weeks. The Falcons picked up a win against MK Bucks. Cris Hiche hit two homeruns in that game. New signings Salas and Gregory also hit homeruns this weekend, which is exciting news for Herts fans. 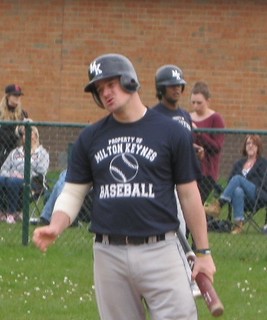 British baseball fans would have noticed that the NBL’s 2012 Most Valuable Player, Jarrod Pretorius (pictured right), was wearing a MK Bucks uniform this weekend so there is a question as to which team he is likely to play for this season. 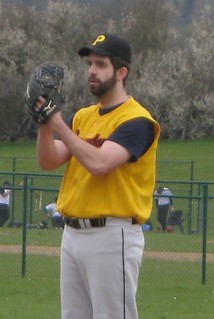 Falcons’ second game ended in a tie against the South London Pirates which was awarded as a win for the Pirates on the “count-back” rule. This was the first opportunity to see the Pirates this Spring and they unveiled an interesting starting pitcher (pictured left). The name of the player was not disclosed but he will certainly cause problems for NBL teams this season with a lively arm.

At the same time news was filtering through from Town Mead Ballpark of a potential shift in the balance of power in the NBL. The rumours are that GB National Team player, Maikel Azcuy, Edwin Alcantara and perhaps one or two other members of the 2013 championship-winning Nationals will be wearing the Arrows uniform this season. Home runs are rare at Town Mead Ballpark, but that didn’t seem to worry Azcuy who launched one in the Arrows’ 14-3 win over London.

In a further blow to the reigning champion Nationals it is being reported that their gold glove-winning catcher, Will Lintern, has made the move to Hove Tuesday.

Bracknell and Southampton have announced several big additions. Catcher James Pearson has joined the Blazers, while the Mustangs will look to go one better this year with the addition of Jose Lopez, Marius Urbanavicius and Steve Petzer. We understand that they have lost their base-running king, Victor Aizpura. 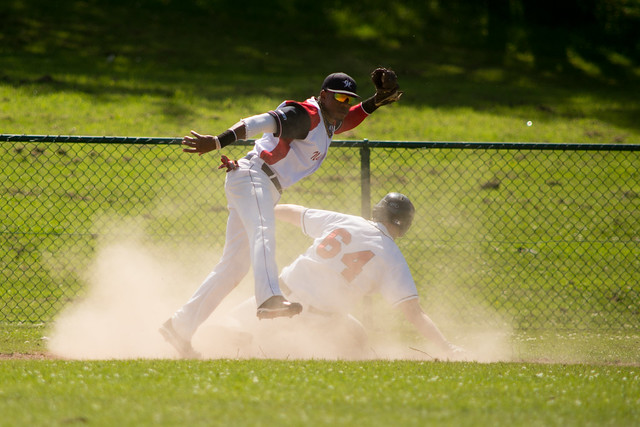 Elsewhere during week two of the HSL the London Marauders produced a staggering comeback as they overcame a 10-run deficit going into the final inning of their HSL game against the Herts Hawks. Some would attribute this partially to the Hawks running out of pitchers at the end, but there is no doubt that the Marauders needed a great deal of clutch hitting to make this possible. The U17 league teams all won. London Mets U17 beta Southampton. The Herts Harriers came out on top in a closely fought 1-run game with the London Musketeers. The Ravens (U19/U17) also picked up a win in their game with Cambridge Royals’ second team.

The unbeaten streak continued for London Mammoths pitcher, John Peters, as his team won convincingly against the Essex Redbacks. The Herts Raptors brought the tying run to the plate but Kent Mariners held on for the win on Saturday.

The action continues next weekend. 8 HSL games are scheduled at Grovehill Ballpark and they will be followed by the main event, London Mets at Herts Falcons, in their NBL season opening series.

WEAR THE HERTS BASEBALL JERSEY IN 2014