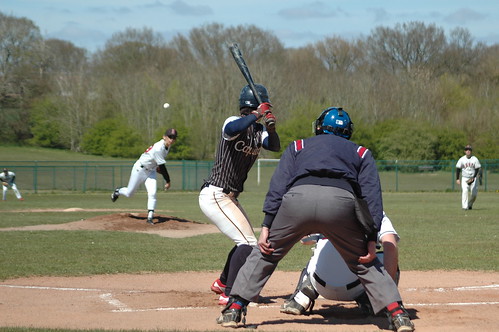 Like everything else at the moment, the 2021 Herts Spring League was a bit different. It was quick as a flash. It was more knock-out blow than drawn-out battle.

The usual three weeks of competition were condensed into one weekend on the baseball diamonds of Grovehill. The impact of the pandemic had cut short the time available for pre-season.

One of the other points that made it different this year was the arrival of the first women’s team in the history of the tournament. Belles Baseball made a big noise and splash in the Single-A competition, bringing a lot of energy to the event.

The Herts Spring League provides a great opportunity for teams to finalise their preparations for the upcoming British baseball season. This year, it saw 22 teams play 21 games on 2 diamonds over 2 days. Single-A and Double-A were on Saturday, Triple-A and NBL on the Sunday.

The sun shone gloriously for both days, which we have decided must be a good omen for the season ahead. Yes, it was on the cool side but, hey, it’s the Spring.

Let’s start with the Belles, who opened their HSL account against a Herts side, the Eagles. The visiting team fell behind early on, but fought back with some patient at-bats and aggressive stealing to make it 9-5. The Eagles ran out winners, and the Belles then took on the London Mustangs. Another tight contest ended 9-7 to London.

Top slot in the league was shared by the MK Bucks 2, and the Londoners — who were undefeated. The Eagles, Raptors, Mustangs and Bracknell Inferno each took a split from their weekend. Minotaurs fought hard and scored well but couldn’t secure a W.

If the Belles Baseball were something new, the presence of the Croydon Pirates in the Double-A division was a blast from the past. The team is a revival of what was a stalwart of British baseball a few years back. They won 8-2 over Sidewinders, and then defeated London Musketeers 9-2 to claim the title. London had beaten the Hawks 10-2, and Hawks went down by the same score to Sidewinders in the third place playoff.

Sunday saw the Triple-A action first, with Essex Redbacks finally breaking open a tight contest against the London Mammoths to win 7-2. It was a game with several double plays stifling an offensive threat. All the games were tight in this division. London Marauders took the title with one-run wins over BC Vetra and the MK Bucks.

London Mets dominated the NBL tournament, putting down a marker they intend to defend their title again. They opened their account with a 3-2 win over the Essex Arrows, as the London Capitals saw off the Herts Falcons 10-2. In the second round of rubbers the Mets beat the Caps, while Falcons secured a split on their weekend with a victory over Essex.

The BBF league schedule starts this coming weekend, so the HSL gave a last chance to hone strategies and test players under game conditions. Everyone will have come out of the weekend with a greater sense of what they need to do for success.

Signs are good that the summer of 2021 will see plenty of baseball. Herts thanks all the players who came down and took part, and everyone who made it happen.