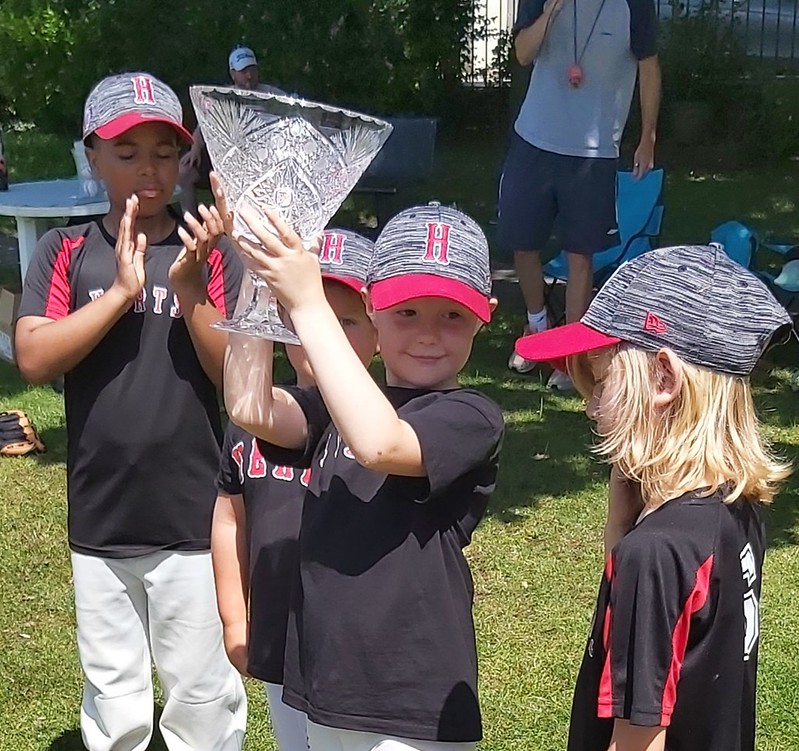 The Herts Londoners clinched the Under-11 division of the Herts Youth Baseball League after a dramatic race with the Herts Raptors and the Herts Falcons which went right down to the wire.

At the start of the day the Londoners and Eagles were in third and fourth place, two games back on the Falcons and Raptors.

The Eagles struck first with a 3-2 win over the Hawks helped by Sterling de Vita’s first home run of the season. On the other diamond the Londoners also won in their clash with the Falcons. This win proved to be crucial later in the day.

The Hawks may have been eliminated from the race but they were determined to leave their mark and they did so by causing a major upset beating the league leading Raptors and then the Falcons to derail their title push.

It came down to the final games of the day. The Falcons, Raptors and Londoners were tied in first place. The Londoners faced the Raptors. The Falcons were up against the Eagles.  Both games started at the same time on adjacent diamonds which enabled the fans to witness the drama on both diamonds as it unfolded.

During most of the season the Falcons relied on the home run power of Connor O’Neill-Thompson.  He continued his bombardment adding to his tally to finish the season as the league’s leading home run hitter with five home runs. Rory Graham, who comes from the same school as O’Neill-Thompson, joined the Falcons partway through the season but he proved to be another power hitter for the team.  It was his home run that clinched the 2-1 walk off win for the Falcons. On the other diamond, the Raptors and the Londoners were tied 3-3 and the game had to go into extra innings.  On the hottest day of the year so far, to avoid heat exhaustion, the league had decided in advance that tied games would be determined in a hitting contest where the teams would nominate one of their players and the team whose representative hits the ball furthest would be awarded the win.  A high flying shot by Cosmo English won it for the Londoners.

This meant that the Falcons and Londoners were still tied in first place.  The league rules state that “the head-to-head results between the tied teams should be used to establish placings”.  The players and fans had to go through an anxious wait while the league commissioner and team officials were going through the season’s scores between the two teams. The confirmation came over the public announce system that the Londoners are the 2021 Under-11 Herts Youth Baseball league Champions having won two of their three games against the Falcons over the course of the season.

In the Under-15 Division, the championship was decided in the final game between the Hawks and the Londoners who found themselves tied in first place.  The age superiority of the Londoners was a big factor on the day as they won the game to become the U15 champions.

An outstanding act of sportsmanship by one of the youngest players in the league was recognised during the trophy presentation. 5-year-old Mason Barnaby from the Herts Raptors U11 asked for time during one of the games in order to run to the team bench area to encourage his teammate Owen Ridgway to rejoin the game after he had picked up a knock earlier in the day.

A considerable number of players missed out on these dramatic last few weeks of the season as they were required by their schools to self-isolate in compliance with Covid guidance, but the baseball season is not over.  The national championships are coming up in September and it will be interesting to see how the new generation of Herts youth players will do on the national stage against teams from around the United Kingdom.

Players are still able to register in order to represent Herts in the national championships. For more details contact us.