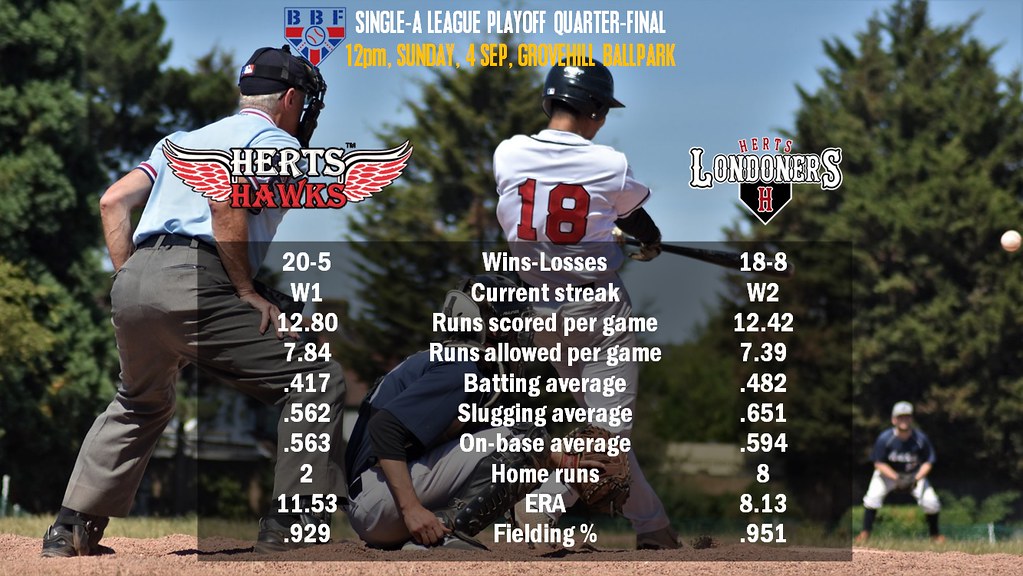 We are now counting the hours until the Herts Hawks and Herts Londoners play in the Single-A League Playoff Quarter-Final this Sunday, 4 September.

The last time a Herts baseball team qualified for the BBF postseason playoffs at any league level was 2019. This may not sound like a very long time ago but for a club of the size of Herts with five teams competing in the various league tiers of British baseball, this feels like an eternity.

The format and seeding meant that the two Herts teams were drawn to play against each other. Herts fans would have preferred to see the two teams meet much later in the postseason, but they will have to accept that one team will be eliminated on Sunday.

Herts teams have met in the postseason only once in the club’s history. That was in 2016 when the Herts Hawks eliminated the Herts Raptors once again in the Single-A league quarter-final, pictured above.

This year the Hawks (20-5) dominated their division and secured their playoff place a few weeks before the end of the season, while the Londoners had to grind out results and go through a nail-biting experience right down to the last games of the season which saw them finish above the reigning national champions, the London Mustangs, only thanks to a better head-to-head run differential as they both ended the season with identical records of 18 wins and 8 losses.

Both teams have many pitching options so it is difficult to predict the starting pitchers. For the Hawks, player-manager Ken Pike seems like the obvious choice having pitched the highest number of innings this year, but they also have Declan Carlean, Harry McMenamin and Luis Martins who have all been effective on the mound this season.

Andrew Slater has been the starting pitcher for the Londoners in 10 of their regular season games followed by Nic Goetz (7) and Greg Bochan (6).

Offensively, the Londoners have their big hitter, Gilberto Medina, who is the league’s joint home run leader with 3 as well as some very consistent hitters like Cory English (BA .750), Simon Langton (.700) and Kenny Liao (.691).

Danny Preston and Todd Neville have shown home run power this season and there are a number of other hitters with impressive batting averages like Paul le Guillou (.636), Harry McMenamin (.625) and Jack O’Brien (.529) but the one batter who the Londoners have painful memories of is Anthony Lavender who hit 3 triples when the two teams met in May. The Hawks won those two games 14-9 and 12-11.

The Hawks also have history on their side having appeared in the Postseason before – in Single-A (2015 and 2016) and Double-A (2017 and 2018) lifting the Single-A national championship trophy in 2016 (pictured above).  This was one of only three national championships for Herts teams over the club’s 26-year history.  The Herts Londoners were formed in 2019 and this will be their first postseason appearance.

Admission to the game is free.  Fans are advised to bring their own chairs or other seating as currently there is no spectator seating at Grovehill Ballpark. Fans who are not able to watch the game in person, can follow the play by play live on the BBF website.