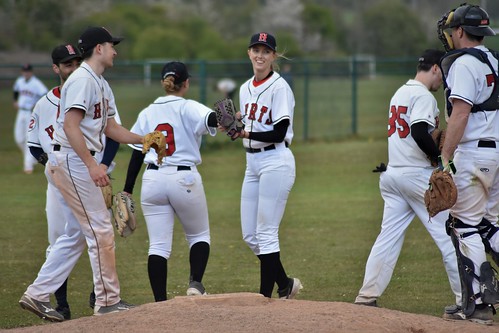 The Herts Falcons chalked up an historic moment for the club on Sunday’s Opening Day, fielding two women players in the NBL side for the first time.

Jessica Vernon and Marianna Casal were on the team which took on the Essex Arrows at Grovehill to start the 2021 BBF season. Unfortunately, they were on the wrong end of two high-scoring defeats, but that couldn’t overshadow the importance of the moment.

Women’s baseball in the UK has made huge and sudden strides over the past 18 months, and Herts is delighted to be a part of that. The club is proud of its record in being open to all talents, and has featured several women players in its ranks over the years – but never at the top level. We are hopeful this can be another step forward, and our aim is to grow the game for all groups.

We think this might have been the first NBL team to feature two women players, and the first to have one of them pitch – but we can’t be certain of that. When Jess Vernon did take the mound, she was certainly highly effective – recording the only 1-2-3 inning for either side on the day.

Marianna Casal has been linked to Herts for many years through her family, as her father and brother have both played for the club. That deep connection runs from the first Herts Little League sides, where she was a singer, fan, mascot and then a player. She won a European Championship with the GB under-19 softball side in 2016.

Sharing the diamond with her brother and father on Sunday at Grovehill gave the day an extra-special element:

“After so many years of being on the sidelines just watching how cool they are, I was excited that I’m a part of it now. They are such a huge part of why I am where I am now. I am truly grateful for all the opportunities that I am getting to progress in the sport that I love – and grateful to Falcons coach Cris Hiche for saying he wanted me on the team.”

In 2017, Jessica Vernon made her first appearance at Grovehill Ballpark. She played for Bracknell’s Single-A side against the Raptors. Since then she has had success in softball and competitive cheerleading, and back to baseball to become a leading light in the women’s game.

She is a founder member of Belles Baseball, who were the first women’s team to enter the Herts Spring League, and who will be part of the inaugural women’s league in 2021. The team was recently featured on BBC television and has been spreading the word about women’s baseball.

Jessica’s performance was rewarded with the BSUK Player of the Week award, which is based on nominations from the baseball community.

The Falcons have seen a lot of change in the off-season and enter this year with fresh hopes. The games against the Arrows were competitive, but not perhaps classics of tight baseball. Game 1 ended 16-13 to the visitors, while game 2 stepped up another level into a football score, ending 24-23.

Marianna Casal said she had loved every single second of the experience, despite the results, and cannot wait for the rest of the season:

“Hearing men from the other team get surprised about what I can do was a lot of fun for me. It will be even more fun when no-one is surprised – when everyone just knows who they’re up against. I was shaking when I got on the field but after making my first play, I just reminded myself that I belong there.”

The new Herts recruits were welcomed by all their team mates. And huge credit goes to the visiting Essex Arrows too. Surprised as they might have been, witnesses at the ballpark say the Arrows offered the same respect to Casal and Vernon as to all the other players.

In a turbulent week for British baseball, these were the good memories and positive images people want to take forward. Amy Trask, who played for the Bracknell Blazers a decade ago in the NBL, said: “It’s great to see women in baseball doing amazing things, and all the support it’s getting.”

The highlight of the weekend elsewhere for Herts came at the first derby game of the year in Single A, where the Londoners were hosting the Eagles at Basing Hill. The visitors’ Alex Plehn – who joined the club last year but has never before played in a BBF league game — hit two home runs. The second of them, a 3-run homer, was key to a 6-5 victory in the second game. Rookie Tom Hill also delivered with his debut on the pitching mound before turning the game over to veteran Mike Wakelam.

The star of the first game, apart from that Plehn home run, was the fielding of Greg Bochan. The former Hawks boss was now manning the hot corner of third base for the Londoners, and made two quality plays before capping it all with a web gem, diving to his left to snare a hard hit ball before somehow making the throw across the diamond too. Londoners won this one 13-5.

The other Single A team, the Raptors, travelled to the Redbacks. Despite some strong performances, the team of mainly novices could not overcome Essex who won 15-6 and 16-8. The Hawks lost 14-8 and 10-8 in Oxford in the Double A league.

Thanks to everyone who contributed to this article, including Jess, Marianna, Tony Small, Amy Trask and Lee Manning.