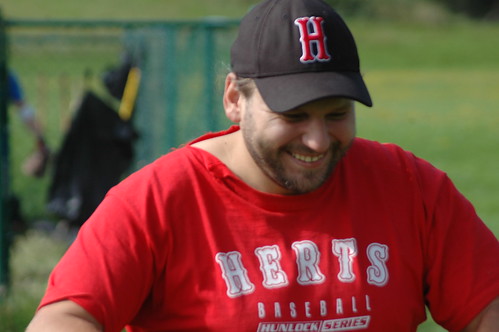 The Herts leadership team for 2022 has taken further shape, with the return of Mantas Poderys. He has been co-opted by the club’s Executive Board as manager of the second Single-A team which will play in Hemel Hempstead.

Mantas was elected as the manager of the Herts Raptors at Grovehill for the 2020 season, only to see it all but wiped out by the pandemic.

However, he was instrumental in the creation and running of the internal league competition which was run at Hemel Hempstead that year, once organised sport was given the go-ahead in the summer. The Herts Baseball Development League was a huge success, which allowed players from all levels to see some game action.

Mantas brought his trademark enthusiasm to the project, the same spirit which saw him make such an impact in his first year as a player at Herts in 2019. His constant desire to improve — combined with endless encouragement of his team-mates — marked him out for a key role.

He had to step back from management in 2021 for personal reasons, but is now raring to go again. The Board was happy to approve his application and we are excited about what lies ahead.

BBF league entries will be finalised in the coming days but the expectation is that two Single-A teams will be based at Grovehill. Most likely they will be the Raptors and the Hawks, but the managers will make the final call. Ken Pike, who led the Raptors last year, remains in place as a manager and is keen to build on last year’s progress.

The club has been having talks with candidates about the vacancy for the Herts Falcons manager. Players report for the first time for training this weekend, January 30th, so planning will take another step forward then.