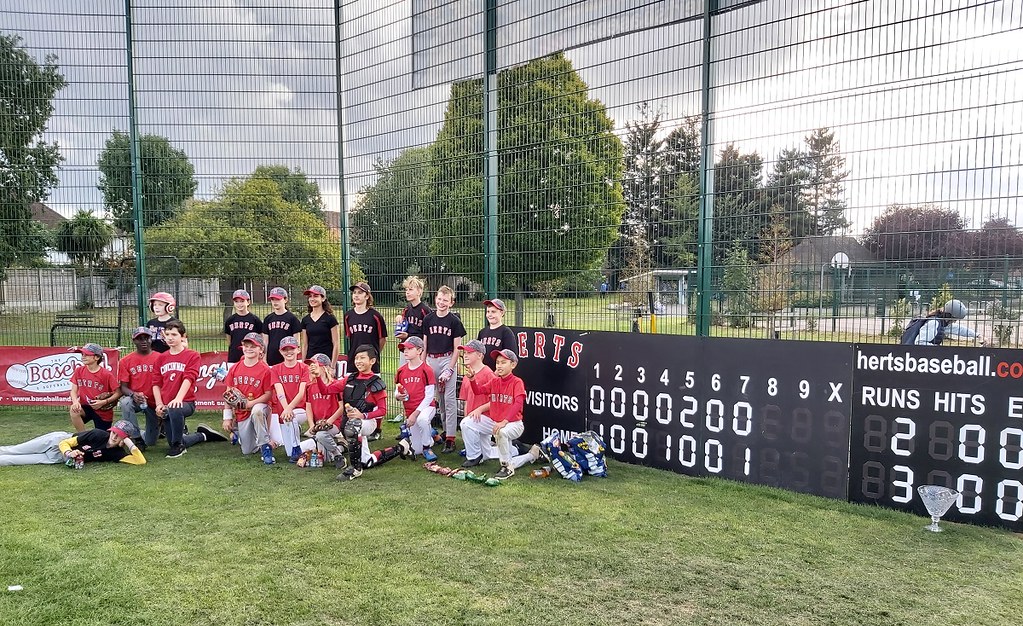 The Herts Youth Baseball League Finals had everything – drama, home runs, walk-off, web gems, comebacks, pitching duels, and most importantly lots of smiles on the faces of players, parents and fans.

These were the first youth league games since the passing of Her Majesty Queen Elizabeth II and the teams and fans held a minute of applause to express their gratitude and respect, which was followed by the playing of the national anthem.

A large number of fans came out to enjoy this occasion and they were not disappointed as the boys and girls put on a show.

First up were the Herts Cardinals and Herts Falcons in the U11 final.  Both teams dominated in the regular season with records of 8-3 and 7-3, respectively. The Cardinals took an early lead and in the first three innings it looked like they would cruise to victory but in the fourth the Falcons U11 struck back with four runs to reduce the deficit to 8-4. This included a home run by debutant Flynn Dunn.

Cardinals U11 responded immediately in the bottom of the inning to extend their lead to 13-4 and their defence shut the Falcons down in the final inning to clinch the Herts U11 championship.

In the U15 Final, we saw a proper pitchers’ duel.  Ben Peters started on the mound for the Falcons U15 and Chi Laam Wong for the Hawks U15.  The Falcons put up one run in the first and one in the fourth but every other inning had a zero on the scoreboard until the fifth inning when the Hawks hit back – Sammy Assael-Francis with the head-first slide beating the tag at home to tie the game at 2-2.

Relief pitchers Kobby Kofuor Darteh and Yaroslav Yefimov continued the dominance which we saw from the starting pitchers and no runs were scored in the next inning.

This final had to be decided in extra innings.  The rule putting runners on second base was in force.  With one out, the Hawks advanced that runner to third base and put a second runner on first base, but an outstanding double play by the Falcons defence ended the threat and the inning.

It was time for a hero to emerge and that hero was 11-year-old Violet Jones.  With runner on third base and one out, she drove the ball up the middle to bring the winning run home prompting wild celebrations to end the 2022 Herts Youth League season on.

Next up is the season-ending Herts Futures Tournament on Saturday, 1 October, at Grovehill Ballpark in Hemel Hempstead. New players can still register in time to play at this event.